The Campaign for Free Expression’s (CFE) special report on recent developments in eSwatini, Dark Days in eSwatini, highlights the monarchy’s harsh response to protest and its tight control over how it was reported. Violent clashes between protestors and soldiers led to between 34 and 50 civilian deaths. 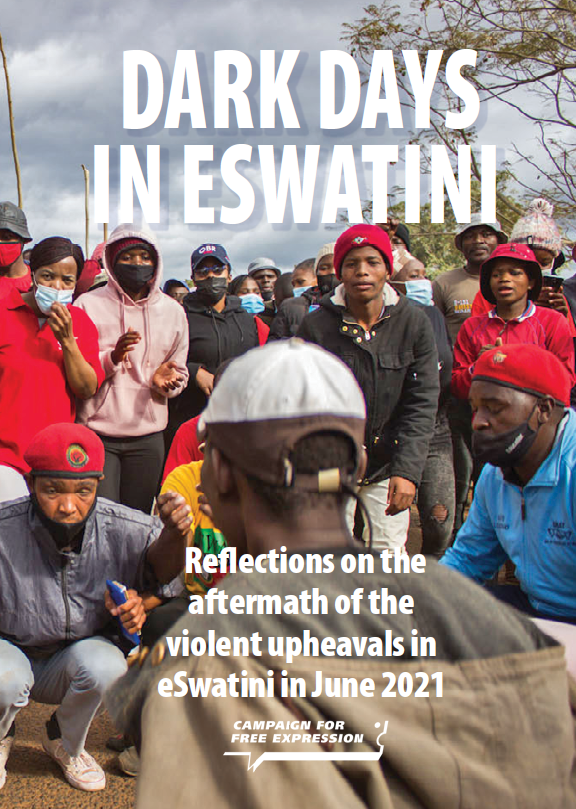 eSwatini’s King Mswati III has long been hostile to its citizens expressing criticism of the country or its governance, particularly anything that may show him in less than glowing terms. Recent events, however, brought a sharp and alarming uptick in the level of repression and violence used by the government and its army to suppress protest and dissent.

CFE cannot condone violent protests, but notes that the King cut off avenues of peaceful dissent and authorised a brutal military response. His government has also kept a tight hold on local reporting, closed down the Internet, and harrassed – and even detained and tortured – international correspondents. The King shows scant respect for his country’s constitution, ruling in an increasingly arbitrary and self-serving way

In the report, eSwatini journalist Bheki Makhubu outlines the history and politics that led to the recent protests, the way the King cut off avenues of peaceful petition, and the harshness of the state’s response.

Two first-hand accounts add to this: the description by two reporters from South Africa’s online magazine, New Frame, of how they were held in an eSwatini police cell and systematically tortured; and an eyewitness piece by an anonymous eSwatini journalist who witnessed soldiers abducting citizens off the streets. The picture that emerges is of an alarming level of repression.

Journalist Carien du Plessis has shown why the matter was not adequately covered by either the local or international media. Although many South African papers gave it low priority, even those who tried to report on events found themselves blocked, harassed, followed and brutally treated.

With little media coverage, many of those who could and should speak out about this – even if only in defense of their own citizens who were caught in the conflict – failed to do so. This includes the South African Development Community, the African Union and the South African and other governments who have influence over King Mswati and his government.

This silence – and what it means for the region and its institutions of governance – is alarming.

The root cause of the violence was the stark and growing disparity between the King’s lavish lifestyle and the poverty of many of his people. This is not going away, which makes it likely there will be further protests and clashes. And further deaths if Mswati is not restrained or encouraged to reform.

This is why CFE is speaking out.